crescendudes: this is basically all you  need to know about the... this is basically all you  need to know about the government shut down.

For the past six months, Disney has been taking Mickey Mouse back to his more surreal, "Steamboat Willie"-style roots in a series of short cartoons

On Tuesday the studio unveiled the latest — and easily the most disturbing — entry in the series: "Ghoul Friend," just in time for Halloween (embedded below)

The four-minute short shows our little rodent friend breaking down in a graveyard and encountering a version of Goofy who wouldn't look out of place in The Walking Dead. There's a strangely happy ending reminiscent of Shaun of the Dead, and the whole thing feels very much like Disney's answer to The Simpsons' Treehouse of Horror Read more...

Halloween-y GIFs all October at PixelClash! by biotv
After the show's finale a week ago, Youtube user Narvinek completes (previously: seasons 1-4) his tribute to Breaking Bad set to Ennio Morricone's The Ecstasy of Gold, from the soundtrack of The Good, the Bad and the Ugly.

by biotv
To honor the passing of Mr. Walter White at the end of Breaking Bad, Dave Layman, a science teacher, a huge fan of the show and a member of the Unofficial Breaking Bad Fan Tour Facebook group, has placed an obituary in the Albuquerque Journal. That's How A Food Company Wins The Internet 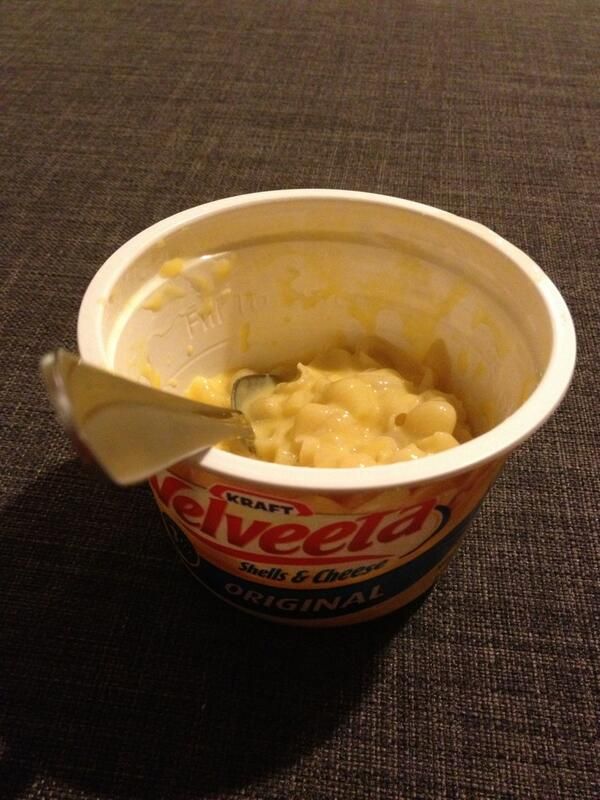 What happens when someone goes on Twitter to express disappointment over discovering his Velveeta cup came waaaayyyyyy too empty? If that person is Chris Torres, the creator of Nyan Cat, and Velveeta just happens to get wind of the Tweet, then pure magic can happen in the form of cheesy goodness. 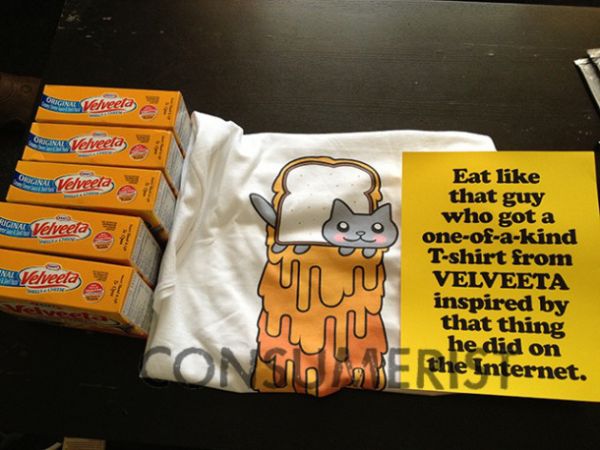 That is, they sent him a package to make up for their blunder that included not only five blocks of original Velveeta, but also a one-of-a-kind tee showing a modified Nyan Cat with bread and drippy cheese replacing Nyan's classic Pop Tart and rainbow.

Aside from showing that they have great customer service, Velveeta really impressed everyone simply by showing off their appreciation for great memes and that's what really matters in a processed cheese food company.

The Children of the Crazies Are Coming! 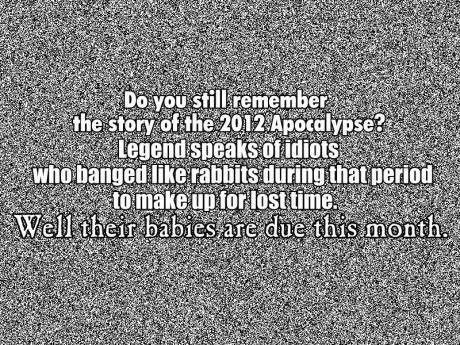 Something the World Truly Needed 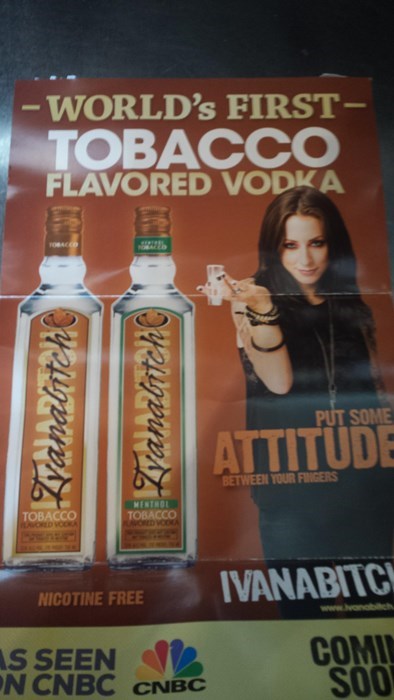 SNK Playmore has terminated its licensing agreement with Tommo, the manufacturer and distributor of the Neo Geo X line of hardware.

Despite SNK Playmore's demands, Neo Geo X products are presently still available via online retailers, including both GameStop and Amazon. A Collection of Budweiser Clydesdale Commercials

(202): you slapped the bag of goldfish out of her hands and screamed, "BITCH THIS AINT NO AQUARIUM". That's how fucked up.

The FDA Isn't Inspecting Food During The Government Shutdown

E-coli outbreaks crop up every now and then. Some are more widespread then others, but if they're related to food and especially if that food may have crossed state lines, the FDA starts tracing to find the source. If foodborne bacteria cause an outbreak in the U.S. today, though, the FDA won't do anything. Because the FDA is closed.

Tabs Always In Titlebar Saves Some Vertical Space in Firefox

and copies chrome, and ie, which copied chrome

If you're on a small laptop or netbook, you know how precious vertical screen real estate can be. Tabs Always In Titlebar is a handy little Firefox extension that does exactly what it says. The Line Between Geek/Nerd Isn't That Heavily Defined

sweaterkittensahoy: Some days, you just can’t get rid of a...

Some days, you just can’t get rid of a bomb.

While it’s impossible to report with any accuracy how many DMCA-style notices are sent by all rightsholders Internet-wide in a typical week, thanks to Google’s relative openness we do have a reasonable idea of the size of the problem.

After a fairly steady climb in the early part the year, between July and October 2012 copyright holders stepped on the gas, sending around 1.8 million URL notices in a single week, more than ten times the amount being sent in a typical seven day period at the start of the year.

Mid November 2012 saw the sharpest increase to date, with 2.8 million URL notices sent in a week, a record beaten in mid December when 3.5 million were delivered to Google.

Then following a deceptive lull at the start of 2013, things picked up again in February. In a single week 3.8 million takedowns landed on Google’s desk, a record beaten again at the end of March when 4.47 million were received.

Since then it’s been rare for more than 4.6 million URLs to be processed by the world’s largest search engine in a single week but the latest figures published by Google reveal that during the final days of last month yet another record was smashed.

Between September 23 and September 29 Google received DMCA notices from 5,407 copyright owners and reporting organizations requesting the removal of 5,310,080 URLs spanning a total of 37,413 domains.

That’s up 561,950 URLs on the previous record set two weeks earlier and a 4008% increase over the first batch of notices listed by Google in July 2011, meaning that Google is now taking down just under nine URLs every single second of every single day.

From the figures for the whole of September we can see that file-hosting site ZippyShare was the number one target with more than 830 copyright holders asking for the removal of 922,946 URLs. Two music linking sites, Dilandau and BeeMP3, took second and third places with 918,008 and 698,985 URLs respectively. File-hosting search engine FilesTube (585,338 URLs) and file-hoster Rapidgator (569,580 URLs) made up the top five.

But despite Google’s herculean response to the demands of nearly 5,500 entertainment and anti-piracy outfits, according to some the search engine still isn’t doing enough. Both Hollywood and the recording labels say that Google needs to step up its game but it’s difficult to see how much more it can do, unless it doesn’t even index ‘pirate’ URLs in the first place….

…and, of course, there you have it……the Holy Grail – for now at least.

USPS Driver Drives Onto Customer's Lawn to Deliver a Package

You couldn't just park, get out, and deliver the package the normal way? Just Be Lucky You Didn't Get an "M" 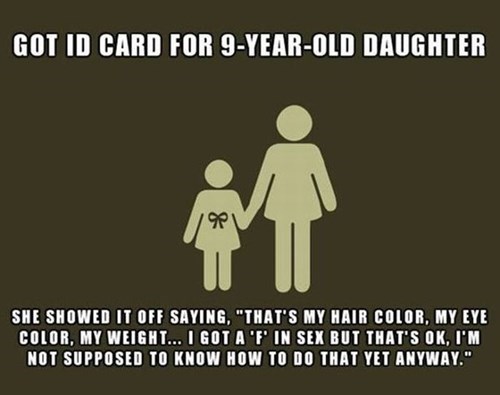 This is the sixth episode in the entertaining Kornhaber Brown-produced webseries, which includes videos about violence in gaming and the "Let's Play" YouTube phenomenon. Each episode offers a fascinating look at the culture surrounding games and the "relationship between videogames and modern life." We recommend you find six minutes and 43 seconds to watch this week's episode; it's a good one.

US Shutdown Is Good News For Patent Trolls

by samzenpus
judgecorp writes "It's just a sidebar on the US government shutdown but, while agencies including NASA and NIST are displaying blank websites, the US Patent and Trademark Office is running as normal because its funding is guaranteed by the US Constitution. Thus, patent trolls can continue to file bogus business patents, while the FTC is closed and can't combat them, and the Department of Justice can't handle appeals and enforcement."

by biotv
In this week's video, John Green takes look at the origins of 42 idioms in the English language, such as "once in a blue moon," "peeping Tom," and "silver lining."

As one of the largest Internet providers in the United States, Comcast is alerted to the existence of pirating customers on a daily basis.

When the provider receives DMCA notices it is required to forward them to the customers in question, and if the copyright holder is part of the six-strikes Copyright Alert System the notice results in an official ‘strike’.

The above is nothing new, but the situation gets more complex when it comes to the effects these DMCA notices have on the long term. Although those participating in the six-strikes system have made it very clear that no accounts will be terminated, outside the program it is certainly an option.

TorrentFreak has received information suggesting that Comcast is actively terminating the accounts of repeat infringers under certain circumstances, without a court order. When we asked the ISP about their policy with regard to repeat copyright infringers, this was confirmed.

“Termination is a requirement of the DMCA and applies to all ISPs, not just Comcast, as a consequence of repeated and egregious copyright infringement,” a Comcast spokesperson told TorrentFreak.

Comcast is indeed correct in stating that Internet providers have to act against repeat infringers. The DMCA requires ISPs to “… adopt and reasonably implement a policy that provides for the termination in appropriate circumstances of subscribers and account holders of the service provider’s system or network who are repeat infringers.”

However, legal experts and Internet providers interpret the term “repeat infringer” differently. For example, AT&T previously said that it would never terminate accounts of customers without a court order, arguing that only a court can decide what constitutes a repeat infringement.

Comcast, however, informs TorrentFreak that a court order is certainly not required under the DMCA and that the company’s interpretation of the law is appropriate.

Comcast is not the only company to take this stance. Verizon’s terms of service also suggest that account termination is an option, without due process. Similar policies are also applied by other service providers, such as YouTube for example. Needless to say, terminating an Internet connection will have more impact than shutting down a YouTube account.

While the DMCA has been in place for more than a decade, the launch of the Copyright Alert System puts the repeat infringer issue in a new light. Previously, ISPs were not obliged to keep logs of copyright infringement notices for a set period of time, but under the new system they are.

In addition, as part of the alert system ISPs are required to track the number of notices “repeat infringers” receive. This means that providers are keeping a database of the most persistent pirates, which outside of the CAS can lead to terminations in Comcast’s case.

Comcast assured TorrentFreak that “termination of a customer’s Internet service is not part of the Copyright Alert System,” but didn’t deny that these notices can eventually lead to account terminations under the ISP’s acceptable use policy.

Under what circumstances this would take place, and how Comcast defines “repeated and egregious” copyright infringement, remains unknown for now. 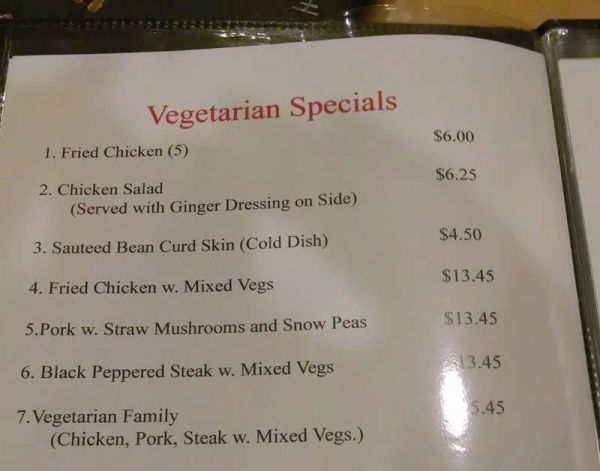 The word "vegetarian" apparently means something different to the person who designed this menu. At first it looks as if they think chicken is not real meat, but then you see pork and steak, too. Maybe it means "has vegetables in it"? Maybe not, as the first offering doesn't mention vegetables at all. Go figure! -via Arbroath