Hovertext:
This is 100% autobiographical except for all the interesting parts.

Is Everyone Still Getting Remote Work Wrong?

by EditorDavid
ZDNet asks: why is everyone getting remote working wrong? Researchers at tech analyst Gartner believe a rigid requirement to return to offices is a mistake. But the researchers also believe so-called "hybrid" schedules often are also flawed: "Most of those work models delivered below-average outcomes," the research found, and the common factor was some kind of rigid on-site requirement. Much more successful was a "hybrid-flexible" set-up offering leaders and employees the opportunity to choose where they work from. But most successful by far were workplaces that offered this flexibility and also included elements of "intentional collaboration and empathy-based management", where bosses don't force staff to come to the office just to keep an eye on them. How the working week is organized matters: get it right, and staff are more likely to want to stay, and more likely to perform well. Autonomy also reduces fatigue, which in turn means workers are likely to sustain good performance over time. ZDNet also tested virtual reality meetings — concluding they're "still undeniably somewhat clunky and can make you feel a bit awkward." But at the same time, "I was also surprised by how much benefit they could potentially deliver." Sure, a meeting with avatars that only look a bit like your colleagues, in a fantasy meeting room that wouldn't look out of place in a Bond villain's lair does feel a bit ridiculous. But it also — and this was the revelation to me — adds a level of engagement that you just don't get from a video meeting of colleagues occupying flat tiles on a screen. It provides a sense of being there (wherever 'there' was) that adds meaning beyond what you get from staring into a monitor. I'm not saying I want to have every meeting in VR from now on: far from it. But we have to see the present state of hybrid and remote working as just the current state of the art, and to keep experimenting, and thinking, about the way we work. 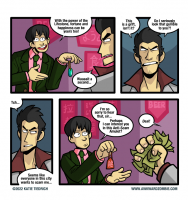 
Kiryu would be way more efficient in his quest to personally thwart every minor con artist in Kamurocho if his first instinct at any given moment wasn't to run face-first into the nearest scam and believe whatever is being told to him.

2. Inside (one part of) the pro-natalist movement.

3. What is going on in Quebec’s health care system?

4. Annie Lowery on women in the economics profession.

5. Intentional, or was there a trickster (or Straussian) involved in this one?

Hovertext:
This is 100% autobiographical except for all the interesting parts.

by EditorDavid
Long-time Slashdot reader destinyland writes: A new book identifies "26 Lines of Code That Changed the World." But its cheeky title also incorporates a comment from Unix's source code — "You are Not Expected to Understand This". From a new interview with the book's editor: With chapter titles like "Wear this code, go to jail" and "the code that launched a million cat videos," each chapter offers appreciations for programmers, gathering up stories about not just their famous lives but their sometimes infamous works. (In Chapter 10 — "The Accidental Felon" — journalist Katie Hafner reveals whatever happened to that Harvard undergraduate who went on to inadvertently create one of the first malware programs in 1988...) The book quickly jumps from milestones like the Jacquard Loom and the invention of COBOL to bitcoin and our thought-provoking present, acknowledging both the code that guided the Apollo 11 moon landing and the code behind the 1962 videogame Spacewar. The Smithsonian Institution's director for their Center for the Study of Invention and Innovation writes in Chapter 4 that the game "symbolized a shift from computing being in the hands of priest-like technicians operating massive computers to enthusiasts programming and hacking, sometimes for the sheer joy of it." I contributed chapter 9, about a 1975 comment in some Unix code that became "an accidental icon" commemorating a "momentary glow of humanity in a world of unforgiving logic." This chapter provided the book with its title. (And I'm also responsible for the book's index entry for "Linux, expletives in source code of".) In a preface, the book's editor describes the book's 29 different authors as "technologists, historians, journalists, academics, and sometimes the coders themselves," explaining "how code works — or how, sometimes, it doesn't work — owing in no small way to the people behind it." "I've been really interested over the past several years to watch the power of the tech activists and tech labor movements," the editor says in this interview. "I think they've shown really immense power to effect change, and power to say, 'I'm not going to work on something that doesn't align with what I want for the future.' That's really something to admire. "But of course, people are up against really big forces...."

Dilbert readers - Please visit Dilbert.com to read this feature. Due to changes with our feeds, we are now making this RSS feed a link to Dilbert.com.
28 Nov 11:30

Did you know that you can buy Dresden Codak merchandise for the holidays? It’s true! There are no known laws against it, and it also keeps me alive in the winter. Current data suggests I wouldn’t be able to make more comics if I was dead.

USB-C has made it easier to plug things in and connect them. Charging, though? Charging is still complicated. You get a different amount of power based on the device, the port, the battery level, and whatever else is drawing current. It can make you wish for a few ports that power whatever you plug in, whatever the size.

You used to need a big surge protector, packed with charging bricks crowding each other out, to get that kind of juice. But these days, gallium nitride-based chargers can put out serious power from a small space. We've scanned the marketplace, tried out a few of them, and have some recommendations for different power needs.

Ars Technica may earn compensation for sales from links on this post through affiliate programs.

Dilbert readers - Please visit Dilbert.com to read this feature. Due to changes with our feeds, we are now making this RSS feed a link to Dilbert.com.
29 Nov 01:40 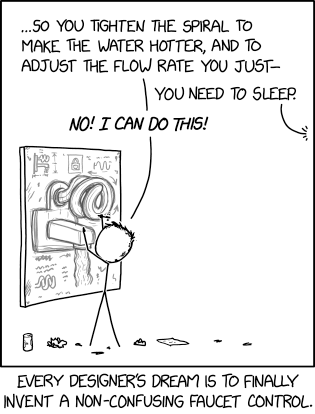 NASA's Orion spacecraft reached the farthest outbound point in its journey from Earth on Monday, a distance of more than 430,000 km from humanity's home world. This is nearly double the distance between Earth and the Moon and is farther than the Apollo capsule traveled during NASA's lunar missions in the late 1960s and early 1970s.

From this vantage point, on Monday, a camera attached to the solar panels on board Orion's service module snapped photos of the Moon and, just beyond, the Earth. These were lovely, lonely, and evocative images.

"The imagery was crazy," said the Artemis I mission's lead flight director, Rick LaBrode. "It’s really hard to articulate what the feeling is. It’s really amazing to be here, and see that."

Cowboy Who?, Lindsey likes this
No more posts. Check out what's trending.